We people are inherently social. When we define ourselves the first things that pop into our minds might be that we are of a certain gender, nationality, occupation and so on, and so on. All these labels through which we identify ourselves are social groups. For it is the social that gives us the sense of who we are. I’m like these people, not like them, and so on.

We communicate with other people and by ourselves in a language. This magnificent tool for communication is inherently social. We, people do have an innate capability of using language, but if we are alone, like wolf kids 🐺, we will never learn to use it. But even if there are as little as two kids, they will start to communicate, they will create their own language if no other language is available to them. To become who we are, we need other people around us.👨‍👨‍👧‍👦 Otherwise we will end up without language, without a concept of self.

Next I’m going to present you different styles of parenting and their developmental outcomes. These results are based on the experiments that resulted in the formation of the theory of attachment by Ainsworth.

Secure attachment is assumed to lead good trusting relationships and contribute to a good self-esteem. Children having this attachment to their primary caregiver feel also comfortable talking about their feelings and they are not afraid of seeking out social support. This type of attachment is a result of the authoritative parenting style which means that the parent is highly supportive and yet sets and monitors rules. Although rules are rules, the parent motivates them to the child by other reasons than “because I say so” and the rules can be negotiable if the child has a good reason. 👍🏻

Avoidant attachment leads to problems with intimacy and unwillingness to talk about emotions. Also these children invest little emotion in social relationships. This is all result of the authoritarian parenting style which means that the support the child gets from his parent is next to nothing, but that there are “because-I-say-so” rules that the parent strictly monitors with no room for negotiation. 😔

Ambivalent attachment provokes reluctance of becoming close to other people and makes the child worry about if the people he holds dear truly care about him. The permissive parenting style is linked to this kind of an attachment. In this parenting style, the parent is more of a friend than a parent. Almost no rules are set, but the parent is highly supportive. 😅

Disorganized attachment flips the roles of the child with his parent. These children are the ones taking the parental role and they might even act as caregivers to their parents. This can happen if the parenting style is uninvolved (laissez-faire). In this parenting style there are neither rules nor support. 😧

⏸ I invite you to take a pause now before continuing. Think of your parents from an objective point of view. What are their parenting styles? Note: your parents might have different styles. How’s your attachment to them? 🤔

One can get a rather one sided view of social development just by looking at Ainsworth's studies. Parents seem to be to the ones ruining their kids or turning their lives into success stories. The reality, however, is far more complicated than that. 🤓

Bronfenbrenner defines the social development as something that consists of different layers, systems. And the relations of these systems are bidirectional ↔. Meaning that parents indeed have a great effect on their offspring, but kids themselves are born with their own personality traits, and thus they affect their parents too. It's a whole different thing taking care of a baby who cries all night long than a baby who sleeps tight most of the time! What I am about to describe is known as the ecological systems theory. 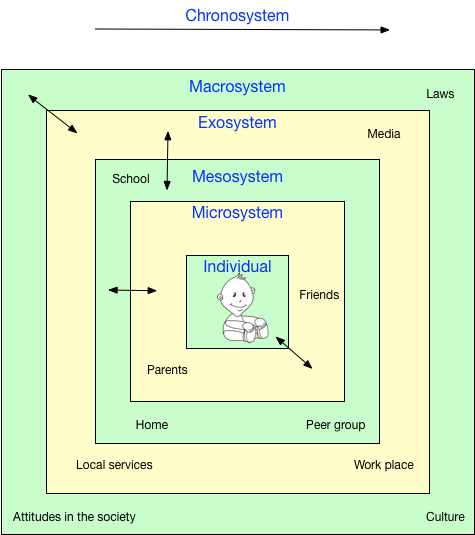 The ecological systems theory is divided into four different “systems” or levels of the social world around the child, with an additional fifth system to describe time.

Microsystem is the closest level to the child. It consists of the important people who are in close interaction with the child such as parents or close friends. Unlike in Ainsworth’s theory, its important to underline that the child affects the people on the microsystem just as much as they affect the child. 👨‍👨‍👦

Mesosystem consists of people who are still part of the child’s life but who aren’t as close as parents, good friends or siblings, for instance. These might be other peers at the day-care center or teachers. This system is also about interaction between different microsystems. For example, friends' families might have impact also on the child. Parent’s support influences on success at school and so on. 🎓

Exosystem is the level of the community. There are things in the city or municipality the child is not directly part of, but that still influence on the child’s development. This means for example, how things are arranged in the city or are there hobbies or activities to do. But also the child’s parents have a role in the community, they might be active in organizations or just simply have a job. If their jobs are stressful or they get a promotion, that will also affect the child. ⛑

Macrosystem is the system that is the furthest away from the child. This includes all society level affairs such as laws, but also class hierarchy, attitudes and culture in general. In some countries, children have more rights than in others, for example. 👑

Chronosystem is just an addition to the model to denote time. It’s important to bare in mind that all the systems will change over time, as we grow older, but they will never stop affecting us like they did when we were kids. ⌛

This was a brief introduction to social development. Both of these theories are useful in understanding the phenomenon. And I really like that they are so different in their approach. It’s just to remind how complex the whole phenomenon is.

really changed my life. It made me realize certain things in my past and solve some issues I didn’t even know I had. I strongly recommend you to read this book with thought reflecting the theories into your own life. That’s how you grow as a person.