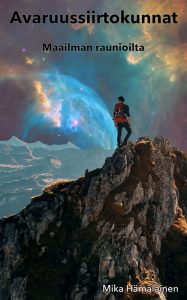 The book describes the world after the Third World War. The war has destroyed the forests so badly that the climate change has gone out of the control. This leaves people with no choice but to escape to the space. Arks are built to take the lucky ones to a voyage across the space to find new planets. The people left behind will, however, face another destiny: there will be enough space for everyone in the bases that are built on the moon and the Mars. Or will there? Is it really so that the climate change is unstoppable?

The book is available for purchase in Finnish on Amazon US,  Amazon Germany, Apple iBooks and Google Play.